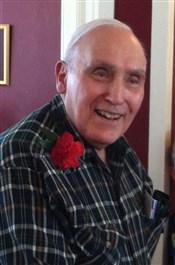 Let us remember the life and ministry of Rev. Charles F. Brown of Kingfield, ME, who died on May 18, 2016 at Franklin Memorial Hospital in Farmington, ME.

Charles graduated from Medford High School in Massachusetts in 1940 and worked for two years at Liberty Mutual Insurance Company in Boston, followed by one year at Northeastern University studying to be a chemical engineer. In September 1942 he enlisted in the Army Air Corps. In April 1943 he was called to active duty, serving as a staff sergeant radio operator, flying in a C-47 of the 306th Squadron, 442nd Troop Carrier Group, Eighth Air Force.

On D-Day his plane dropped parapacks over the beach. He was then involved with other parachute and glider operations, receiving the Air Medal with two Oak Leaf Clusters.

At the end of the war he left his “ship” at Munich, Germany, and came home on the Queen Mary. He was discharged in November 1945 and on December 1st married Elsie Florence Mutch of Medford, MA. They were married by Rev. J. Charles Reid, the founder of the United Methodist Economic Ministry in Salem, ME.

In 1942 Charles had committed his life to Jesus Christ in the living room of Pastor Reid. In 1946 he served as a student pastor in Lowell, MA and Somerville, MA in the former Evangelical United Brethren Church. He graduated from Gordon College in Wenham, MA in 1949 and from Evangelical Seminary in Naperville, IL (now part of Garrett Evangelical Seminary) in 1952.

While in seminary he served in Danforth, IL. After ordination he served in both the New England and New York Conferences, pastoring churches in Quincy, MA; Richmond Hill, NY and Newington, CT. Charles retired to Maine in 1984.

He is survived by his daughter Joyce (Joy) and her husband, John Richardson, of Annapolis, MD; grandchildren Heidi, Amy and David; three great grandchildren; and sister, Olive Daily. Charles also had an adopted daughter Susan, who died in 1996. His wife of 62 years, Elsie, died in 2009 at Sandy River Nursing Home after a long illness.

Although he was raised in Medford, MA, the family has a long Maine relationship. At a later date his remains will be buried at the Brown family plot in the Oak Grove Cemetery in Orland, Maine with a graveside committal.