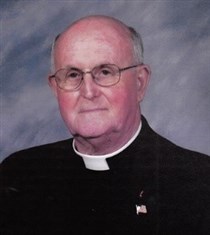 Let us remember with thanksgiving the life and ministry of Rev. Charles Wesley Lanham, 93, of Wolcott, CT, who died on Wednesday, February 22, 2017.

He was born on July 4, 1923 in Darjeeling, India, to missionary parents, Rev. John W. and Daisy Lanham. He served as a bomber pilot in World War II and, after a crash landing with all crew members surviving, was interned in Sweden as a POW until the war ended.

He is survived by his wife of 46 years, Margaret Black Bormolini Lanham. He is also survived by four daughters from a previous marriage: Joyce Zeman and her husband, Rev. Andrew; Donna Lanham; Linda Romanauskas and her partner, Armand Provancher; Debby Cavallari and her partner, Holly McIntyre. He also leaves six grandchildren through his first marriage: Lynne Goulet, Thomas Calo, Jennifer Caron, Jessica LeBel, Jenny Cavallari and Jillian Cavallari; and three great-grandchildren: Dylan Caron, Alexandra Goulet and Mikayla Caron. He is also survived by three stepchildren: Joan Christain and her husband, Scott; Stephen Bormolini and his wife, Diane; Deborah Newsome and her husband, Curtis; two step-grandchildren: Danelle Newsome and Sarah Bormolini, and one step-great-granddaughter, Jocelyn Dumaine. In addition, he is survived by a brother, Rev. Raymond Lanham, and a sister, Lucille Thomas.

The family would like to thank the staff at Wolcott View Manor and Seasons Hospice in Wolcott, CT.

A memorial service was held on Monday, February 27, 2017 at 10:30 am at the Wolcott Congregational Church, 185 Center Street, Wolcott, CT. There were no calling hours. The burial will be private at the convenience of the family. Contributions may be made in Charles’ memory to the Wolcott Congregational Church. Condolences may be made through the funeral home, at www.maloneyfuneral.com.