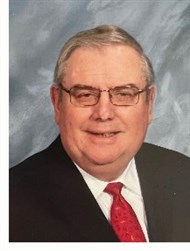 Let us remember with thanksgiving the life and ministry of Rev. Christopher D. Doyle, Jr., 76, of Draper, VA who passed away on Saturday, October 29, 2022.

The son of Lt. Col. Christopher D. Doyle and Evelyn E. Doyle, Chris grew up in Brooklyn until he was seven years old. After his brother was born, the family moved to East Meadow, Long Island, where they met Rev. Arnold C. Miller, who greatly influenced Chris’ family and later encouraged Chris to join the ministry.

While in East Meadow, Chris became a star Boy Scout and sang in his church choir. He worked at Camp Quinipet on Shelter Island for several summers. When Chris was a teenager the Doyle family moved to Connecticut, where they attended the Fairfield and Nichols United Methodist Churches. Chris sang in the choir and taught Sunday School.

Chris attended Norwalk Community College and University of Bridgeport. He graduated from Candler School of Theology at Emory University. At Emory he met his future wife, Susan Oglesby, a graduate student in library science. They were married in 1970.

While in Georgia Chris served as youth minister in Stone Mountain, GA. He and Susan moved back to the New York Annual Conference, where Chris was ordained an elder in 1973. He served a number of churches throughout the conference: Grace UMC in Newburgh, NY (associate), Naugatuck UMC in CT, Riverhead UMC, Farmingdale UMC, Central Islip UMC (all on Long Island), First UMC in Seymour, CT, Cutchogue UMC on Long Island, and in 2004 a return to Riverhead UMC. He retired in 2009.

Chris' favorite responsibility of ministry was serving as mentor to candidates navigating the path to ordination. He also loved to sing and to explore music in all its enhancements in worship. He also completed the certificate coursework in Church Finance and Administration.

Visitation will be at Bower Funeral Home Chapel, 1631 Bob White Blvd, Pulaski, VA from 3pm to 6pm on Wednesday, November 2, 2022 and a Homegoing Celebration service will be held at 2pm on Thursday, November 3, 2022 at Draper's Valley Presbyterian Church, 2755 Old Baltimore Road, Draper, VA 24324, with burial following in the church cemetery.

Gifts in memory of Chris may be sent to www.stjude.org or www.tunnel2towers.org. Messages of condolence may be left at www.bowerfuneralhome.com.