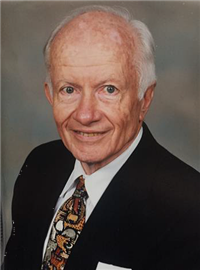 Let us remember the life and ministry of Rev. David Lecour Parker of Wesley Village, Shelton, CT who died on April 6, 2016. David and his twin brother were born on December 20, 1923.

David went to Middlebury College for his freshman year, before transferring to Hamilton to attend his father’s alma mater where his brother was also studying. David served in the Army, and his battalion was destined for the Battle of the Bulge. The night before the troops were set to ship out to Europe, nine men—out of thousands—had their names called. David was one of these nine sent to Guam instead of France, to serve with the Army Signal Corps. In addition to being proud of his military service, he was also proud of his ability to fit into his Army uniform throughout his lifetime.

After college, David went on the G.I. Bill to Union Theological Seminary in New York City. Here he studied with some of the greatest theological minds of the twentieth century, including James Muilenburg, Reinhold Niebuhr, and Paul Tillich. David traveled to Amsterdam and attended the historic first meeting of the World Council of Churches as the secretary to Union’s president, Henry Van Dusen. Upon seminary graduation, David was ordained in The Methodist Church and began serving churches as a pastor. For about a decade, he sponsored immigrant families from Germany in his home. Some people stayed with him for a few months, but one family stayed for three years, during which time David learned to speak German like a native, which he did as often as he could.

In 1959 David met Merolyn Faith Graham, and they were married in 1960. They had three daughters—Julie, Katie and Valerie—and together they created a loving, hospitable home for family and friends. He was a caring father who enjoyed teaching his daughters army calisthenics, making them animal-shaped pancakes, and writing songs for them on their birthdays. He was also happy and proud that all three daughters, and later a grandson, Eli, would go on to attend Hamilton College.

David was a lifetime pastor who served eleven congregations in northern New Jersey, Staten Island and Long Island. He blessed every church he served with his musical abilities as he played the piano and organ and knew over 300 hymns by heart. He also was deeply committed to clear and meaningful liturgy. Churches David served in NYAC included Staten island-Summerfield, Albertson, Woodmere-Lawrence, and East Meadow. He retired in 1994 and continued to serve in East Hampton until 2004.

David was an early supporter of civil rights, women’s rights and gay rights. Additionally he was a community leader in interfaith relations. Usually an easy-going, affable person, he was deeply upset by acts of injustice, and he joined in protests and reached out to individuals to help.

Merolyn and David retired to Lord’s Valley, PA, where he continued his active church involvement as organist of the Church at Hemlock Farms. After the death of his wife, Merolyn, in 2007, David went to live with his daughter Julie and her family in Larchmont, NY. before finally settling at Wesley Village.

David died peacefully of natural causes. He leaves behind a strong legacy of love and memories of wonderful music, along with thousands of personalized poetic, acrostic and musical tributes that he wrote for colleagues, friends and family. People who knew David recall his vibrant energy, vigorous piano playing, deep faith and endearing character traits. In addition to extended family, there are also dear friends who are considered part of the family. He is survived by three daughters and two sons-in-law: Julie Faith Parker and Bill Crawford, Kate and Don Parker-Burgard and Valerie Parker; and six grandchildren: Graham, Mari, Jacob, Eli, Maxwell and Josephine.

There will be an interment with the family on Saturday morning prior to the service. The funeral service will be held at the Larchmont Avenue Church, 60 Forest Park Ave, Larchmont, N.Y., at 3 pm on Saturday, April 9, 2016.

In lieu of flowers, the family requests contributions to either Hamilton College or Wesley Village with a notation that the donation be directed to the David Parker Memorial Fund: