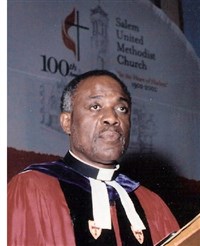 Let us remember with thanksgiving the life and ministry of Rev. Dr. Birchfield Charlesworth Preston Aymer, who died on April 4, 2018 on the island of Antigua from an aneurysm. He was born on November 1, 1944 in St John’s, Antigua, the youngest of six children of John and Millanette Aymer.

He grew up in Ebenezer Methodist Church in St. John's, and was educated at the St John’s Boys School and the Antigua Grammar School. He became a candidate for ministry in 1967, was accepted by the Synod in that same year and entered the United Theological College of the West Indies (UTCWI), in Kingston, Jamaica. He graduated from UTCWI with the approved professional qualification at that time of licentiate in theology (LTh) and entered service of the Methodist Church as a fully qualified minister of religion of the Methodist Church in the Caribbean and the Americas. He served as a Methodist minister throughout the Caribbean, notably in the British Virgin Islands and the Netherlands Antilles.

In the year 2000, Rev. Dr. Aymer accepted an invitation from the New York Conference to become senior pastor for Salem UMC in Harlem, where he served for six years. While at Salem he successfully spearheaded the construction of a housing project for underprivileged communities and saw the first of these buildings (called “Salem House”) completed and occupied by low to moderate income families of Harlem. On May 29, 2006 Rev. Dr. Aymer suffered a massive stroke which left him disabled and led to his early retirement.

After moving back to his native Antigua, he continued to dedicate his life to ministry. Rev. Dr. Aymer participated in the worship life of Ebenezer Methodist Church (the principal Methodist church on the island), trained local preachers and held weekly Bible Study sessions for congregants.

He is survived by his wife, Jean, as well as his children, Elise and Birchfield, Jr.; his stepchildren, Tammy and Rohan; his grandchildren, Laurel and Mariam; his step-grandson, Tristan; his siblings; and numerous nieces and nephews.

His funeral service, beginning with tributes, will take place on April 19th, 2018 at 9 am at Ebenezer Methodist Church in St. John's, Antigua. There will be a recognition of his ministry in the New York Conference and at Salem UMC at a later date.