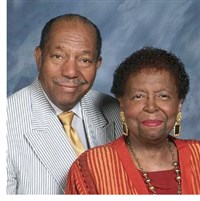 Let us remember with thanksgiving the life and ministry of Rev. Dr. Thomas P. Grissom, Jr, 92, who died on Wednesday, April 8, 2020.

The Rev. Dr. Thomas P. Grissom, the son of a Methodist minister, was born in the Bronx on November 4th. His parents moved to Georgia where he was raised and nurtured in the church.

He was a graduate of Clark College in Atlanta, GA, (Clark-Atlanta University), and went on to receive his Master of Divinity and Doctor of Ministry degrees from Gammon Theological Seminary in Atlanta, GA, a part of the Interdenominational Theological Center. Additional education included the Doctor of Ministry Program at San Anselmo Theological Center in CA;  the Urban Renewal Program sponsored by Ford Foundation in Chicago, IL; and a Doctor of Divinity degree from Houston-Tillotson College in Austin, TX.

Rev. Grissom was ordained a deacon and elder on June 24, 1951. He served in the North Georgia Conference and the California-Nevada Conference, where he was appointed as the Dean of the Cabinet and District Superintendent of the San Jose District (1972-1978). In 1980 Rev. Grissom moved to the New York Conference, where he served St. Mark's UMC in Manhattan, Janes UMC in Brooklyn, Salem UMC in Manhattan, and Hanson Place Central UMC in Brooklyn.

Rev. Grissom was active throughout the general church and found time to participate in community ministries, serving on many boards, foundations and agencies. In the New York area, he participated in: the board of directors of the Federation of Protestant Welfare Agencies; the board of directors of the Brooklyn Council of Churches; the New York City Council of Churches; and the Rotary Club of Upper Manhattan (past president and president-elect).

In 1998 Rev. Grissom retired from full time ministry in the New York Conference. In retirement Rev. Grissom continued to serve Mt. Calvary UMC in Manhattan until 2008. He could be found at his local church sitting beside his beautiful bride every Sunday until his demise.

Funeral and memorial arrangements are not available at this time. Interment will take place at his family plot in Georgia.