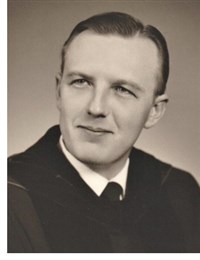 Let us remember with thanksgiving the life and ministry of Rev. Dr. William “Bill” Harold Waters, 92, who died peacefully at his home in Cambridge, NY on Saturday, April 18, 2020.

Born in Watertown, NY on September 13, 1927, Bill was the son of Rev. Barber L. Waters and Rachel E. Saxton. Bill graduated from Watertown High School in 1947 and then from St. Lawrence University in Canton, NY with an A.B. degree. He attended the Theological School of St. Lawrence University, graduating with a Doctor of Divinity degree, and pursued additional studies at Boston School of Theology and Christ Church College in Canterbury, England. He received his elder’s orders in 1955.

Bill married Margaret “Peg” Ann Duffany – the girl next door. She was a graduate of the Strong Memorial Hospital nursing program in Rochester, NY with an R.N. degree. She was active in church work on the conference, district, and local levels, as well as being an outstanding soloist in church choirs. Bill and Peg traveled extensively for Educational Opportunities, twice leading groups through Israel. “Peg o’ my heart,” as Bill lovingly called her, passed away on January 2, 1999.

Bill served in both the North New York (now part of the Upper New York Conference) and the New York conferences. He came to the New York Conference in 1955 and served the following churches: Woodbury, Cold Spring Harbor and West Hill UMCs on Long Island; Glendale UMC; Center Moriches UMC, Ridges UMC in Stamford, CT; Wappingers Falls UMC; Yorktown UMC; Lakeville UMC in CT; and Sea Cliff UMC. Bill retired in 1989. After retirement he moved back to the Troy area, where he served until 2003.

Among his many accomplishments, Bill served the New York Conference by raising funds to build the new Woodbury UMC building on Long Island. He was involved in merging churches on three separate occasions, was a supervising pastor, served as district mission secretary, and conducted mission and education workshops on the district level. He also served as a member of the Board of Ordained Ministry and as chair and stewardship chair of the Board of Discipleship.

Bill worked tirelessly for housing for the poor, supported the Civil Rights movement by marching for Selma in 1965, and was one of very few clergy in Queens, NY to stand behind the New York City School Board to integrate the schools. He led the students at Vassar College against the Vietnam War, and was against the war in Iraq. Bill supported giving women an equal place in ministry with men, and fought for decent salaries and benefits for the clergy. He felt that all people should be welcomed and accepted by the church.

Bill made many contributions to his community, including serving as Hudson River Salvation Army secretary for nine years, Protestant chaplain of the Castle Point Veterans Administration Hospital for six years, and interim chaplain of the Hudson River State Hospital in Poughkeepsie for one year. He was also chaplain of the police and fire departments in several of the communities he served. In April 1978, Bill was surprised with a “Bill Waters Day” celebration by the community of Wappingers Falls, NY. Representatives from federal, state, county, and local governments, as well as clergy from all major church denominations, honored Bill with a church service, a parade through the center of town, and a banquet.

Bill enjoyed painting, calligraphy and writing. His oil painting of Jesus Christ was displayed in the sanctuary of the Furman Street UMC in Syracuse, NY. Using his calligraphy skills, he designed and produced certificates of ordination for five UM Conferences over the course of 15 years. He also wrote the text, “Two-Thousand Years of Methodism in the Hudson East,” a history of early Methodism in the Hudson Valley area. This work was followed by drawings and histories of the sixty-four churches in the Hudson East District.

Bill’s ashes will be buried next to those of his beloved wife, Peg, in the Stump Church Cemetery in North Cambridge, NY. The family requests that in lieu of flowers, donations be made to your local food bank. Per his wishes, Bill would like everyone to know that they are welcome to sit on the beautiful Vermont granite bench that marks the site of his and Peg’s resting place.