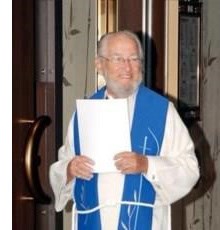 Rev. Gault was born in Philadelphia, PA in 1924 to Edwin and Helen Gault. In 1943 he enlisted in the US Navy, where he served for three years. With the help of the GI Bill, he received a bachelor of arts degree from Dickinson College in Carlisle, PA and then continued his studies at Oxford University. He earned a master of divinity from Yale Divinity School.

In 1950 Ted set off on his path of ecumenical service. He served as youth director at First Baptist Church, Bridgeport, CT, and then as student pastor at South Middletown Methodist Church in CT. He was ordained in the Methodist Church in 1952 and was appointed student assistant for youth work at Cairns Memorial Church in Edinburgh, Scotland while pursuing PhD coursework at the University of Edinburgh. Upon his return to the US in 1956, he pastored the following churches: The Village Church-Methodist in Bayville, NY; High Ridge UMC in Stamford, CT; Commack UMC on Long Island; and Sheepshead Bay UMC in Brooklyn, NY. From 1973 to 1988 he was appointed to the Interchurch Center in New York City, first as assistant director and then as assistant to the president. He served as NYAC Conference Secretary from 1963 to 1972.

After his retirement in 1989, Rev. Gault served as interim pastor at Orient UMC on Long Island and at New Paltz UMC. He performed numerous wedding and baptismal ceremonies around the country for family and friends. He and his wife, Carol, moved to Fort Myers, FL in 1992, where he continued his involvement with church and community organizations. Ted enjoyed boating, a good baseball game, sitting on the beach, traveling and being surrounded by family.

A memorial service will be held on Saturday, January 20, 2018, at 10:00 am at St. Hilary's Episcopal Church, 5011 McGregor Blvd, Fort Myers, FL 33901. In lieu of flowers, the family respectfully requests donations to St. Hilary's "Repay, Restore and Re-imagine Capital Campaign." This is a capital campaign near and dear to Ted and Carol’s hearts.