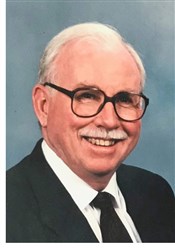 Let us remember with thanksgiving the life and ministry of Rev. Ernest Burton (Burt) Davison, 87, of Langhorne, PA, who entered the church triumphant on Wednesday, November 28, 2018 at St Mary Medical Center, Langhorne, PA.

Born in Windsor, Canada, son of the late Ernest and Christine (Ross) Davison, Burt lived in the New York City, Long Island and Catskill Hudson areas for many years before moving to Langhorne nine years ago.

Burt served honorably in the United States Marines as a drill instructor. He graduated from Syracuse University and from Union Theological Seminary in New York with a Master of Divinity degree. He received his license to preach in 1955 in the New York East Conference and became an elder in full in 1959. He ministered to churches in New York for over 40 years, serving Union UMC in South Ozone Park; South Third Street UMC in  Brooklyn; Elmhurst UMC; The Village Church in Bayville; Kings Highway UMC in Brooklyn; Freeport UMC; Broadway Temple UMC in Manhattan; and St. James UMC in Kingston.

Burt was known for being deeply involved not only from the pulpits of the New York congregations he served, but also in the greater community and personal lives of those who came to hear him preach, many of whom also came to know Burt not only as a minister, but as a friend. At Freeport UMC, where he served the longest, he became so involved in the community that the local mayor had a day named in his honor.

Husband of the late Carol Gillespie Davison, and father of the late Daniel Davison, he is survived by one son and daughter-in-law, Michael Davison and Xiu (Sunnie) Chen of Brooklyn, NY; by one daughter and son-in-law, Ellen Davison and Chris Wright of Rail Road Flat, CA; by seven grandchildren, Jacob, Geoffrey, Miles, Felice, Angie, Kaya, and Trillium; and by one great-grandchild, Casey, and several nieces and nephews.

Funeral services will be held at 2 pm on Saturday, December 8, at the Freeport UMC at 46 Pine Street, Freeport, NY 11520.

In lieu of flowers, as both Burt and his late wife Carol were lifelong civil rights and social justice advocates, memorial contributions in his memory can be sent to the American Civil Liberties Union (online or by mail to the American Civil Liberties Union, c/o Gift Processing Department, 125 Broad Street, 18th Floor, New York, NY 10004) or to a similar charity of your choice.