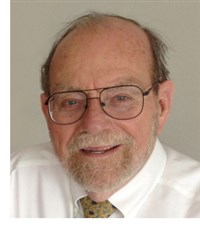 Let us remember with thanksgiving the life and ministry of Rev. F. Kennon Moody, 86, who died peacefully on Saturday, April 11, 2020 at his home at the Fountains in Millbrook, NY.

Ken was a master story teller who took twinkled-eyed enjoyment in telling tales about himself and his friends and family, the most memorable of which centered around life in Cotton Valley, LA, where he was born in 1933. He was the youngest of four children of John and Nell Moody - his three siblings, John, Dan and Nell Barnwell, all predeceased him. Ken graduated valedictorian of his high school and attended Centenary College in Shreveport, LA, earning a B.A. in history before heading north to New Haven, CT, where in 1958 he received a Master of Divinity from Yale Divinity School. In 1958 Ken married Mary Law and they moved to Williston, VT, where Ken became pastor at the Federated Church and both of their children were born.

In 1963, Ken and Mary moved to LaGrangeville, NY, where Ken served as the pastor of Trinity UMC. While at Trinity, Ken worked with a group of parishioners to launch Dutchess Rural Housing Corp, a non-profit that built homes for low-income families. Ken left Trinity to join the South Forty Corporation, a non-profit organization focused on assisting prisoners and recent parolees, where he developed a college program for inmates and taught at Green Haven Correctional Facility. From that point forward he spent his career in extension ministry. After several years, Ken left South Forty for Dutchess Community College, initially as a history professor (both at Green Haven and on campus) and ultimately as Dean of Student Services. While at Dutchess, Ken obtained his Ph.D. in American History from SUNY Albany, where he wrote his dissertation on Franklin D. Roosevelt. Ken retired from the New York Annual Conference in 1997.

In his retirement, Ken rekindled his passion for history and FDR, acting as a professional Roosevelt researcher and assisting writers of all stripes. He contributed to more than a dozen books, a PBS special, and ultimately authored his own book, FDR and his Hudson Valley Neighbors. He spent many hours with his beloved daylilies, hybridizing new variants, and became a master gardener through the Dutchess County Cooperative Extension. Together with Mary, Ken became an active traveler, going to Scotland, Ireland, France, Republic of Georgia, Kenya, Serbia and Greece as well as taking multiple trips to South Africa. From the time he left Trinity, Ken and Mary were devoted members of the Freedom Plains Presbyterian Church.

Throughout his life, Ken was devoted to community service, volunteering to serve on a host of boards, including the Mental Health Association of Dutchess County, United Way, the Arlington school board, and the Dutchess County Council of the Boy Scouts of America. Ken also assisted Mary in her long-term involvement in CROP, where he served for many years as the chair of the Dutchess County chapter.

A memorial service will be scheduled once gathering restrictions are lifted. In lieu of flowers, donations can be made for the Dutchess Interfaith CROP Hunger Walk to Crop Hunger Walks, P.O. Box 968, Elkhart, IN 46515 or online at https://www.crophungerwalk.org/Donate.