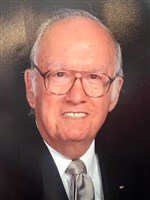 Let us remember with thanksgiving the life and ministry of Rev. Dr. Frederick G. Mech, 93, who died surrounded by his family on Saturday, January 15, 2022.

Dr. Mech’s major emphasis in ministry was to deal directly with the needs of the congregation. He trained as a pastoral counselor at the Foundation for Religion and Mental Health in Pleasantville, NY. He served the New York Conference as pastor of the Church of the Good Shepherd for twelve years followed by the congregations of Roslyn UMC, Rye UMC, West Hills UMC in Huntington Station and Bayport UMC. In each location “God’s grace sustained the Lord’s ministry.”  Dr. Mech retired in 1994.

Dr. Mech is preceded in death by his son, John Clifton Mech III, and his wives Audrey and Margaret. He is survived by his children, Virginia Steigerwald and Kristin Sallah, his son-in-laws Don Sallah and Wayne Steigerwald, and his grandchildren, Susan, Vincent, Brittany and Savannah, along with 6 great-grandchildren.

A memorial service will take place on Friday, January 28, 2022, 11:00am at the Bayport UMC with Rev. Sejin Cha presiding. The service will also be available on You Tube and Zoom. Burial will be at St. Ann’s Parish Church cemetery, Sayville, NY.

In lieu of flowers, donations can be made to Hospice Catholic Home Care or a cancer research center of your choice.