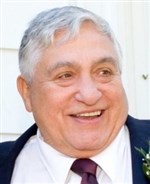 Let us remember with thanksgiving the life of Rev. Frederick M. Moore, 84, a resident of Moriches, NY who died Aug. 3, 2016 at Peconic Bay Medical Center in Riverhead, NY.

Rev. Moore was born Nov. 22, 1931 in Port Jefferson to Karl F. and Mildred (McClure) Moore. He was a U.S. Army veteran and a former member of the Riverhead Fire Department, Washington Engine Company.

After serving in the Peninsula Conference from 1963 to 1966, Rev. Moore became a member of the New York Conference. He served Lake Ronkonkoma UMC in Lake Grove, NY; Riverhead UMC in Riverhead, NY and later Orient UMC in Orient, NY. He retired in 1997 and continued to serve at Orient UMC for the next ten years. Rev. Moore also served the New York Conference as executive director of the UM Retirement Community Development Corporation, Long Island, from 1979 to 1983, and as president of the Peconic UM Housing Development Fund from 1983 to 1990. He was the founder of John Wesley Village senior citizen community in Riverhead.

Predeceased by his first wife, Lois Jones Moore, in 2003, Rev. Moore is survived by his wife, Sharon, sons Thomas, William and James and by his sister, Mary Ellen DeBacco. He is also survived by eight grandchildren and one great-grandchild.

Memorial visitation will take place on Friday, Aug. 12, from 2-4 pm and 7-9 pm at Tuthill-Mangano Funeral Home, 406 East Main St, Riverhead, NY. There will be a service of remembrance during the second visitation. Interment will be private.