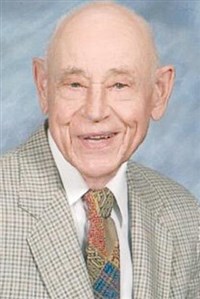 Let us remember with thanksgiving the life and ministry of Rev. George Ralph Bailey, 99, who died on Monday, May 22, 2017 at Wesley Health Care Center in Saratoga Springs, NY. George was born November 20, 1917 in Rutland, VT.

George graduated from Rutland High School in 1937. He attended Syracuse University, graduating in 1941, and continued his academic career at Yale Divinity School, from which he graduated with a master of divinity in 1945.

George enjoyed serving the community in many ways. He was an active member of the Lion's Club and became a charter member of the Burnt Hills-Ballston Lake Rotary Club. He was also chaplain for the Mamaroneck Volunteer Fire Department.

In 2001 George moved to Woodlawn Commons Independent Living in Saratoga Springs, NY, but ministers like George never really stop caring for the flock. He continued his ministry by leading weekly services until his eyesight failed. He also continued his love of service and absolute joy for gardening by caring for the Wicke Memorial Garden and community gardens for several years. His greatest love, however, was the time he spent with his beloved family, especially his granddaughters and great-granddaughter. In 2013 George Bailey celebrated 75 years in the ministry.

George was the beloved husband of the late Mavis (McCarthy) Bailey; devoted father of Christine Yesse and her husband, David Mitchell, of Troy, NY, and Brenda J. Lewis of Kingsport, TN; doting grandfather of Sharon E. Palmisano of San Fransisco, CA and Liesel A. Welsch and her husband, Daniel, of Niskayuna, NY; caring great-grandfather of Keira M. Welsch and loving brother of the late Murial Blauvelt and Marjorie Strout.

The funeral service for George will be Sunday, June 4, 2017 at 3 pm at First UMC, 603 State Street, Schenectady, NY. The Rev. Sara Baron will preside. A reception will follow in the fellowship hall at the church. Memorial donations in George's name may be made to Sunshine Fund at Woodlawn Commons, 156 Lawrence St., Saratoga Springs, NY, 12866 or to the church of your choice. Expressions of sympathy can be left at www.TownleyWheelerFH.com.