The Reverend Glenn I. Miller

The Reverend Glenn I. Miller 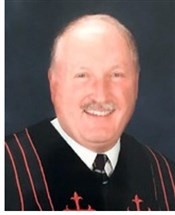 Let us remember with thanksgiving the life and ministry of Rev. Glenn I. Miller, 79, of Beaufort, SC, who died on Sunday, December 5, 2021. Glenn was born on February 6, 1942 and grew up on Long Island, NY in the village of Valley Stream.

Glenn received a B.S. from Tusculum College, a B.D. from Yale Divinity School, an S.T.M from New York Theological Seminary along with a certificate in pastoral counseling from the New York Post Graduate Center of Mental Health, and a D.Min. from Columbia Theological Seminary. He was ordained a deacon in 1969 and an elder in 1971 in The United Methodist Church and served at Stratford UMC and Newtown UMC, both in CT.

In 1977 Glenn received a commission in the Navy and served as a Navy chaplain for 21 years, providing ministry to various Navy, Coast Guard and Marine Corp units and their families. His military commendations include the Meritorious Service Medal, Navy Commendation Medal, Navy Achievement Medal, National Defense Medal and Humanitarian Medal. In 1997 he was appointed pastor of The Village Chapel in Pinehurst, NC, an interdenominational church. He served that community for 10 years, retiring in 2007. In 2007 he and his wife, Betty, moved to Bluffton, SC. He was elected and appointed as the national chaplain for the Military Officers Association of America (MOAA) for a 6 year term.

In 2015 he and Betty moved to Bermuda Village, a retirement community located in Bermuda Run, NC. While living there he and his wife co-chaired the Chapel Program. He also volunteered for Meals on Wheels and was active in the Tarheel Chapter of the MOAA. He authored two books, The Hosea Model for Marriage, published in 1998, and Living a Balanced Life, published in 2015. In 2021 Glenn and Betty moved back to Beaufort, SC where they were active at the Carteret Street UMC.

Glenn was a devoted and loving husband, father and grandfather. He was a strong Christian leader in the church and around the world. He had a great sense of humor and loved to tell crazy jokes.

A memorial service was held on Saturday, December 18, 2021 at the Carteret United Methodist Church in Beaufort, SC. Burial was at the Beaufort National Cemetery.