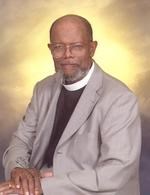 Let us remember with thanksgiving the life and ministry of Rev. Henry Elias Johnson, of Humble, TX, who died on Saturday, April 15, 2017. He was 80 years old.

Rev. Johnson was born January 8, 1937 in Hernando, MS. Henry was called to preach when he was only seven years of age. As a child he lived with his maternal grandmother, Mariah Williams, a devoutly religious lady. He was a very studious child, which earned him the nickname “professor”.

Rev. Johnson attended Jackson State University, where he majored in industrial arts and minored in art. He graduated from Jackson State in 1962. In 1964, he enrolled at Drake University Divinity School. He majored in Old Testament studies and Semitic languages and literature, graduating in 1967. Two days later, he was ordained in the Christian Church (Disciples of Christ). He later completed additional studies at Boston University, Harvard University and the Foundation for Biblical Research.

Rev. Johnson served United Methodist churches in the Detroit, East Ohio and Troy Conferences before joining the New York Conference in 1990. In New York, he served Trinity UMC in White Plains for four years and St. Matthew’s UMC in Ossining for 14 years. He retired in 2007. Upon retirement Rev. Johnson and his wife, Helen, relocated to Humble, TX, where he was a member of United Methodist Men and participated in several Bible study groups.