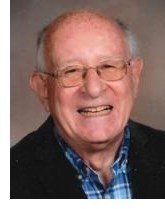 Let us remember with thanksgiving the life and ministry of Rev. Howard E. Newton, 92, of Port Orange, FL who died on Thursday, June 10, 2021.

Howard was born in 1929 to Bill and Florence Newton in Readsboro, VT. He grew up in Old Tappan, NJ and graduated from Hope College in Holland, MI in 1951. Howard received a Master of Divinity degree from New Brunswick Theological Seminary in 1954. He married Frances Perry on June 26, 1954.

While serving in New York City he was very active in the civil rights movement and in ecumenical ministries. In 1965, he became the missionary minister to Stony Brook, NY, at the time a rapidly growing suburb, and built a new church.

In 1971 he became a provisional member of the New York Conference of the UMC, becoming a full member three years later. He served Christ UMC in Staten Island, NY from 1971-1978. He and Fran went on to serve three additional congregations: Hobart & Township UMCs in Hobart, NY from 1978 to 1984, and Milford UMC in CT from 1984 to 1994.

Howard retired in 1994, and he and Fran relocated to Port Orange, FL. Howard could not stop serving and volunteered for numerous jobs, including visitation minister for First United Methodist Church of Port Orange, volunteer for hospice, and working at an overnight shelter for houseless people. Howard was a remarkable individual who touched the lives of countless people, never met a stranger, and always believed in the best of everyone.

Howard was preceded in death by his wife, Frances, his son Wayne, and his sister Marjorie. Howard is survived by his son Bruce (Wendy), his daughter, Lisa (Bruce); his grandchildren, Elissa (Curtis), Andy (Kate), and Delaney; his great-grandson, Kieran; his siblings Richard and Shirley; and his dear friend Elaine Mulder.

Memorial donations may be given to First United Methodist Church of Port Orange. A memorial service will be held later this summer.