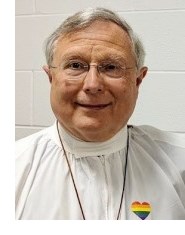 Let us remember with thanksgiving the life and ministry of Rev. John J. Blossom of Guilford, CT, who died unexpectedly on September 15, 2019 after a short illness while on a church related conference trip to South Korea. His wife, June-Ann Greeley, and son, Christopher, were at his bedside during his final days.

Born in Springfield, MA, John spent most of his childhood and teen years in New Jersey. He returned to New England to attend Connecticut College in New London, CT and spent most of the rest of his life on the Connecticut Shoreline. It was at “CC” that John and June-Ann met, and they remained together until his untimely death. John majored in American literature and graduated with a B.A. in English from Connecticut College, but his first career path led him into the growing tech industry and its interface with financial agencies and corporations. During that time, John authored the book Content Nation, which has now become a prophetic analysis of the complexities of the contemporary cultures of social media and big data.

While he enjoyed the intellectual challenges the tech industry offered, John had always felt a calling to the ministry in The United Methodist Church. John decided to follow a second career path towards ordination in The UMC. He graduated from Hartford Seminary with honors and then received his M.Div. (with honors) from Yale Divinity School and was commissioned as a provisional elder at the June 2019 New York Annual Conference.

At the time of his death, John was the pastor of South Meriden Trinity United Methodist Church and the United Methodist Church of East Berlin, and was never happier than in his daily life as a pastor. He responded joyfully to the call to serve the people of his congregations and their communities and he was eager to spread the good news of Jesus wherever he went. In his capacity as pastor on a wider scale, John was involved in interfaith conversations among clergy in Meriden, in local environmental concerns, in immigration outreach, and in developing programs for children. Even now, his desk is full of papers and plans for future projects and programs that might transform the world into a kinder and more loving place. John’s whole effort was to bring the message of Jesus and the truth of the Kingdom to all people.

John was also something of a renaissance man and he took pleasure in a range of interests and passions. While in college, he became a driving force in building and managing the campus radio station. That love of radio and communications never left him. John was a life-long, devoted Yankee fan and made sure that his son also followed the ‘Pinstripes.’ Some of his best times, he would often say, were the games he attended at Yankee Stadium with Christopher. John loved the sea and sailing, and enjoyed birding and gardening, and listening to jazz and the blues. He was also working on a novel about Downeast Maine for several months before he died, not only because he enjoyed writing but because he felt great fondness for the rugged terrain of far northeast Maine. John was an explorer and from the time he was a child, he sought out opportunities to discover new places and new cultures. He recently journeyed to Africa and Puerto Rico on church-related service trips. John was always happy when he was helping others.

In addition to his wife and son, John is survived by his father, John Kenyon Blossom of Springfield, MA, and his sister, Anne B. McManus of West Springfield, MA. He was pre-deceased by his mother, Louise “Jill” Steiner Blossom.

Calling hours will be held at Guilford Funeral Home, 115 Church Street, Guilford, CT on Friday, September 27, from 5-8 pm. The funeral service will be at 10 am on Saturday, September 28, 2019 at First United Methodist Church, 159 East Main Street, Meriden, CT. Clergy are asked to wear white robes with red stoles and arrive at 9:45 am.