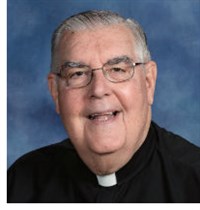 Let us remember with thanksgiving the life and ministry of Rev. John “Jack” P. Fahey, Jr, 79, of Shirley, NY who passed away at Long Island Community Hospital on Tuesday, May 18, 2021.

Jack loved preaching and singing and had a great sense of humor. He enjoyed vacationing in Montauk, St. Thomas and Jamaica. He loved politics and religion and sought to never mix the two. A lifelong Democrat, he was very active in Glen Cove and Nassau County politics from the 1960s to the 1980s. He was at his happiest when he was surrounded by friends and family.

He was a member of the Glen Cove Elks Club and was secretary in the 1970s to early 1980s. Jack was in charge of UMC lay speakers classes in his district and chaplain at Peconic Bay Hospital in the 1990s. He was also a member of Riverhead and Lynbrook Rotary Clubs, fire chaplain of the Lynbrook Fire Department, and a 32nd degree Mason of the Masonic Order of Masons in Riverhead, Glen Cove, and Lynbrook. He was a lifetime professing member of the Order of Saint Luke.

He is survived by his wife, Jean; his sons, Edmond (Valerie) and Patrick (Diane); five grandchildren, Cullen, Catherine, Megan, Dillon, and Caroline; several cousins; and by many loving friends.

Funeral services were held at St. James UMC of Lynbrook on Monday, May 24, 2021 at 11:00am. Interment was at East Hillside Cemetery, Glen Head, NY.