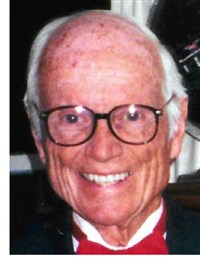 Let us remember with thanksgiving the life and ministry of Rev. Kenneth R. Baldwin, 95, who died on August 27, 2018. He was born June 26, 1923 in Syracuse, NY to the late Bert and Mae Baldwin of Fayetteville, NY.

In 1940 he met the love of his life, Nancy Hall, at a youth social at the Charlotte Congregational Church, where her father, the late Raymond A. Hall, served as pastor. Although WWII lengthened their courtship, they were married in 1948 in the same church by Rev. Hall and shared 70 years of happy marriage. Ken and Nancy enjoyed dancing well into Ken's nineties, often to the applause of onlookers.

Ken studied chemical engineering at Syracuse University, and during WWII he served in the Pacific for three years in the U.S. Army Corps of Engineers as a combat engineer. Following the war, Ken was called to the ministry. He studied at the University of Edinburgh, Union Theological Seminary and Yale Divinity School. He was ordained to the Christian ministry in 1953 and began his pastoral work at the North Presbyterian Church in Flushing, NY. During this time, Ken and Nancy hosted three refugee families from Hungary and Cuba. After serving churches in the Upper New York Conference, Ken served in the New York Conference for fourteen years, pastoring the following churches: Red Hook, NY and Rowe UMC in Milan, NY; Liberty, NY; Higganum and South Middletown in CT; and Treadwell, NY. He retired in 1988, and served the Upper Catskills Larger Parish (NY Conference) and East Worcester UMC (Wyoming Conference) in retirement.

Ken loved to sing, joining the choirs of the churches he served and regional choral groups. He also enjoyed golf. Following his retirement, he and Nancy settled in Oneonta, NY. Ken continued to supply preach and served as a chaplain at A.O. Fox Hospital in Oneonta. He was honored with regular invitations to preach at Catholic churches in the region, which reflected his ecumenical spirit. He was an active member of the Rotary and the VFW and served on the boards of Catholic Charities and the Foothills Performing Arts Center.

Ken was predeceased by his parents; his brothers, Clarence and Guy; his sister, Doris; and his cousins, Robert Clifford, Jack Clifford, and Neil Frink. He is survived by his loving wife, Nancy; his son, Stuart and his wife, Harriet (Cone) Baldwin; his daughters, Amy and her husband, Douglas Berry, and Anne Baldwin; his brother-in-law, Avery Hall and his wife, Andrea Rogers; his niece, Marko Russell; his nephew, Michael and his wife, Joan Spasyk; and many nieces, nephews, and cousins.

A memorial service was held at the Fairport UMC, 31 West Church Street, Fairport, NY on Saturday, September 8, 2018. Interment was at the Grandview Cemetery in Charlotte, VT, on October 27, 2018. Donations may be made in Ken's memory to the Charlotte Congregational Church or the University of Vermont.