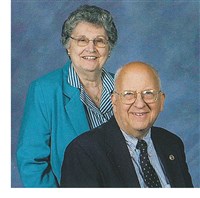 Let us remember with thanksgiving the life and ministry of Rev. Louis E. Rowley (Reverend Lou), who entered the church triumphant on Sunday, May 19, 2019.

Reverend Lou was born on January 6, 1936 in Brooklyn, NY.  He grew up in Brooklyn and Port Washington, NY. He attended Swarthmore College and Drew University Theological School. While at Drew, he was a student pastor at Sea Cliff Methodist Church in NY. It was during these years that he met his future wife, Mary Lou Davies.

Upon retirement, Lou and Mary Lou moved to Drexel Hill, PA, and he continued volunteer pastoral duties at The Garden Church in Lansdowne, PA, where he led Bible studies and occasionally preached and played the organ. In 2017, they moved to the Methodist retirement community Simpson House in Philadelphia, where he would continue to preach occasionally. His last sermon was preached in January 2019. He played the organ and also led very popular hymn sings for his fellow residents.

Rev. Lou was the quintessential pastor:  a great communicator and preacher, supportive leader, empathetic counselor and friend to his flock. He led youth groups at both of his churches, influencing the next generation of Christians. He was a firm believer in community involvement and during his long pastoral career either participated in or chaired the boards of many organizations. In Astoria, he was involved in the Martin de Porres Center, antipoverty programs, and was secretary of the City Society. In Mount Vernon, the organizations included Rotary Club (Paul Harris Fellow), Salvation Army, Riverdale Methodist Home, Seabury-Wilson Home, Meals on Wheels, Council of Churches (president), the Interfaith Clergy Association, Mount Vernon Hospital (trustee) and the Metropolitan District (UMC) Committee on Church Buildings and Locations.

Louis was a loving and supportive husband, father and grandfather who will be forever missed.
He is survived by his loving wife of 56 years, Mary Lou; his three sons, James (Lisa), John (Melanie) and Peter (Toni); and his grandchildren, Alex, Sarah, Matthew, Will, Seth, Tommy and Ella. He was predeceased by his parents, Louis and Maybelle Rowley, and three grandchildren, Robert, Hannah and Jack. Louis is also survived by his brothers, Robert (Emily) and David (Abbie), and by numerous nieces and nephews.

A memorial service will take place at Simpson House Chapel, 2101 Belmont Avenue, Philadelphia, PA on Saturday, June 29, 2019. There will be visitation from 1pm to 2pm, with the service starting at 2pm.

In lieu of flowers, donations can be made to Simpson House Benevolent Care Fund, 2101 Belmont Avenue, Philadelphia, PA 19131.