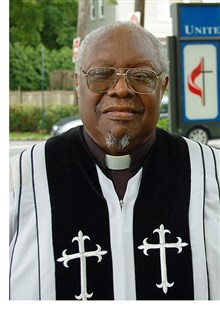 Let us remember with thanksgiving the life and ministry of Rev. Marion Cornelius Mitchell, 82, of Valdosta, GA, who entered the church triumphant on June 7, 2022 at home under the care of hospice. He was a man of faith believing that the promised life in eternity with God would be so much better than this earthly one, so he surrendered peacefully and gratefully to rest in the arms of God.

Marion was born to Marie Jones Mitchell and Julius Caesar (J.C.) Mitchell on June 16, 1940 in Sycamore, GA and grew up in Valdosta, GA. He graduated from Pinevale High School in 1959, and from there he left to serve in the U.S. Army. He was stationed in various bases around the country, in Germany and in Japan, before being sent to Vietnam where he fought with the “Big Red One” infantry division. He often told his “saving story” of how he was plucked from certain death by someone who woke him with a tap on the shoulder in the middle of the night and whispered, “Get up, Marion, all hell is about to break loose.” Though he looked around and saw no one, he took cover just as a mortar round landed where he was sleeping. The Vietnam War took from him his peace of mind and left him raw, sad, and with a Purple Heart. He was forever altered by what he witnessed there, and he came to have a keen empathy for those in the world who suffered as victims of war.

Discharged from the service in 1967, he lived in New Haven, CT, where he worked in various industries before going on to earn his college degree from the University of New Haven and a Master of Social Work from the University of Connecticut. While wandering about to find his place and purpose in life, he recalled his “saving story” from Vietnam and realized that God had a plan for him. With encouragement from his pastor and friends at Summerfield in New Haven, he entered Yale Divinity School, graduating in 1979 with a Master of Divinity.

Marion was appointed to Calvary UMC in the Bronx, NY, and then to Woodycrest UMC, Westchester UMC, Ardsley UMC, Peekskill UMC, and Christ UMC in New Rochelle. After 30 years in the ministry, he retired in 2009. He cherished his years with the Wellspring community, Walk to Emmaus, and other conference-sponsored spiritual growth programs. He served on the Board of Ordained Ministry at the district and conference levels for many years where he loved hearing the testimonies of up-and-coming pastors because these stories helped remind him of why he served God and God’s people in the local church.

In 1972, Marion met Shelley Renish at the Ecumenical Institute in Chicago and a year later they were married in New Haven. Their son, Sean, completed the family in 1984. Shelley for many years served as the assistant to Rev. Ann Pearson who was Director of Connectional Ministries for the NY Conference.

Marion will be forever remembered by his laughter, which was loud, hearty, and infectious. While he sometimes found ministry in the parish trying, in each church community Marion treasured those times when he could sit around a table in the church fellowship hall - especially after a good Methodist potluck luncheon - to shoot the breeze, tell some funny stories, and enjoy the company of his church family.

A Service of Christian Burial will be conducted in the Chapel of McLane’s Funeral Home in Valdosta, GA, on June 14, 2022. He will be interred at the Riverview Memorial Gardens with Military Honors. Those wishing to remember Marion are encouraged to donate to the United Methodist Committee on Relief (UMCOR).