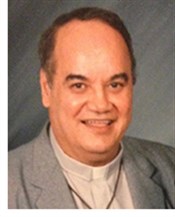 Let us remember with thanksgiving the life and ministry of Rev. Dr. Raymond Santos, who passed away peacefully on Sunday, September 6, 2020 surrounded by his family. Raymond was born on August 30, 1947 in San Juan, Puerto Rico to Eduardo Santos and Luz Maria Sepulveda.

Prior to becoming clergy, Rev. Santos taught math in the New York City public school system. He volunteered as a chaplain for the American Red Cross at Ground Zero in September 2001.

Raymond is survived by his devoted wife of fifty-four years, Monserrate Maysonet-Santos, and his three daughters and their spouses: Rev. Wanda (Rev. René Pérez), Elizabeth (Rev. Dr. Christopher Fisher) and Sarah (Javier Camacho). He was also a devoted grandfather to and adored by Kayla (Nathaniel Kilmonis), Luke, Isaias, Mercy, Ezekiel, Kassandra, Raquel, Andres and Eva. In addition, he is survived by his siblings Eduardo, Miguel, Rev. Rosa, Rafaela, Carmelo, Juan, Carlos and Jose. He was predeceased by his parents and his brother Victor.

Funeral services for Raymond will be private only for the family. The family asks that those who wish to make a donation in Raymond’s name give to The Assistance Fund, Inc. (Parkinson’s Copay Assistance Program) or Lewy Body Dementia Association (LBDA).