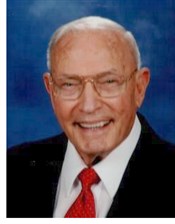 Let us remember with thanksgiving the life and ministry of Rev. Robert Charles Moffat, 100, who died on August 4, 2020 in Lafayette, IN.

He was born on June 14, 1920 to William and Mary Emma (Calloway) Moffat in Monessen, PA, where he spent his formative years.

Bob joined the military during World War II and served under Patton's Third Army as a lieutenant in reconnaissance and fought during the Battle of the Bulge. During his service he earned a Purple Heart and a Bronze Star for Meritorious Service. He served again in Germany during the Korean War. Later in his military career as a chaplain, he rose to the rank of colonel in the Army Reserves.

After the war ended, he attended Fredonia College and the seminary at Drew University, and in 1959 he was ordained as an elder in the United Methodist Church. Bob served a total of five churches in New York and Connecticut for over 30 years. These included Sag Harbor UMC in NY; Trinity UMC in South Meriden, CT; Newington UMC in CT; and Summerfield UMC in Bridgeport, CT. He was also the protestant chaplain for St. Vincent's Hospital in Bridgeport, CT.

Due to the current pandemic conditions, a memorial service will be held for Bob at a time to be determined.