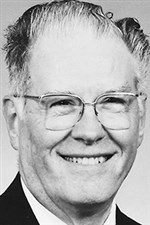 Let us remember with thanksgiving the life and ministry of Rev. Dr. Robert G. Barnes, 83, who died Saturday, November 12th at his home in Kingfield, Maine with his wife and dear friends at his side.

In 1955 Robert was licensed by the Atlantic Conference of the Evangelical United Brethren Church and in 1959 was ordained by Bishop Herman W. Kabnick in Lancaster, PA.

In 1975 Robert earned his master of divinity from Temple University.  He completed a required short-term study at Yale University and earned his doctorate of ministry in 1976 from Drew University. Robert served the Emmanuel Evangelical United Brethren Church in Brooklyn, NY from 1959-1964; Calvary EUB/United Methodist Church in Queens Village from 1964-1971; Christ UMC in Port Jefferson Station from 1971-1978, and the Commack UMC from 1978-1998.

While serving at Emmanuel EUB, Robert was a Port representative for the entry process of missionaries for the Board of Missions. He served as chaplain of Bethany Deaconess Hospital until it closed. While serving at Commack UMC, Robert organized a peaceful demonstration after the destruction of the athletic field the night before high school graduation. He was always considered a “peacemaker.”

In 1958 he married Nancy Heisler whom he met when he served as the assistant pastor at her home church in Philadelphia.

Robert retired in 1998 and he and Nancy moved to their home in Kingfield, ME. He served on the Kingfield Budget Committee and was chair of Kingfield Water District. The loss of his eyesight forced him to retire from both committees. He enjoyed working for causes for which he had strong feelings.  Robert was an avid reader and public servant, and enjoyed collecting stamps.

Robert is survived by his loving wife, Nancy. He was predeceased by his parents and sister, Dolores Greth.

Funeral services were held on Wednesday, November 16, 2016 at the Wiles Remembrance Center in Farmington, ME. Interment was at Sunnyside Cemetery, Kingfield, ME.

Condolences may be shared on the memorial wall at www.wilesrc.com.  Remembrance gifts may be made to the “Gifts of Love," c/o Shelby Banks, 18 Caboose Lane, Kingfield, ME 04970