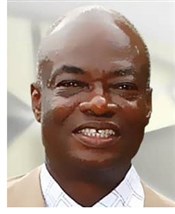 Let us remember with thanksgiving the life and ministry of Rev. Samuel Amartey-Amarh, of Orlando, FL, who entered the church triumphant on Tuesday, August 24, 2021. Samuel is the husband of Rev. Esther Amartey-Amarh, who retired from the NYAC in June 2021. They had just relocated to Florida.

Pastor Samuel Amartey-Amarh was born on the 11th of July 1944 to Daniel Amarh Odametey, a carpenter, and Theresa Ago, a trader. He was the first of seven children born to his parents. He attended the Methodist basic school in Dodowa and then proceeded to Ghanata Secondary School where he completed his Ordinary level certificate in 1964. He then proceeded to Cape Coast University where he read Education and majored in Chemistry and Physics. He was a sports man and was captain of his basketball and net ball teams in the university. He and his family were raised in the Methodist church and that was where he fellowshipped until he was born again during his university days when the ‘Vision team’ lead by the late Reverend Ababio visited them on campus. After his new birth his passion and love for God deepened and he never lost his love for Christ and his zeal in bringing many people to the Lord. He loved Jesus Christ extremely well and shared that to others across the board all the time, non-stop. He was diligent and passionate about revival. His desire was that there would be a revival in hearts and God will be exulted above all else.

In addition to his wife of 48 years, Esther, Samuel is survived by four children, Hannah, Joseph, Samuel and Daniel, and their spouses. He is also survived by eight grandchildren.

There will be a burial service on Friday, September 24, 2021 at 9:00am. The location is the Evangel Church International, Alogboshie, Accra. A Thanksgiving service will be held on Sunday, September 26, 2021 at 9:30am at the same location. Interment will be private.