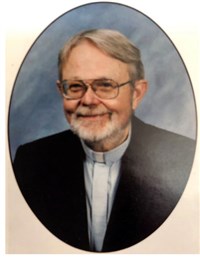 Let us remember with thanksgiving the life and ministry of Rev. Wellman Joel Warner, Jr, 90, of St. Petersburg, FL who died on Wednesday, January 5, 2022. He was born October 29, 1931 in Columbus, OH to Miriam Saint Warner and Dr. Wellman J. Warner.

Joel grew up in Central Pennsylvania, attending Mercersburg Academy, a boys prep school, for his last few years of high school. He graduated from Ohio Wesleyan University with a bachelor's in sociology and took a master’s year in sociology at New York University. Not having a clear direction in life and not yet having found his faith, he worked as a volunteer in the Methodist orphanage, Casa Materna, in Naples, Italy, that his parents had supported all his life. He used the language of music to communicate with the children, forming a four-part acapella choir and touring with the children around Europe and for six months across the US, singing in churches. Joel honed his communication and persuasive skills to raise significant funds for the orphanage. With the encouragement of the orphanage director, he directed his life towards ministry. He also fell in love with a young woman, Ida Mastri. Her Protestant family had sent her to the orphanage to be educated when she was a young girl, and as she grew older she stayed on and took care of the younger girls. They were married in her home village, Faeto, and came to the US where Joel followed his father to Yale Divinity School.

Joel planned to return to the orphanage, but an intern year in a parish church inspired him to pursue parish ministry. He was appointed to Port Jefferson UMC where he served from 1961 to 1968 and where his three children, Paul, Stephen and Sarah, were born. His second appointment was to Islip UMC from 1968 to 1976, a thriving church with a membership of 1300 and a full-time associate minister. Joel hit his creative stride and directed an exciting programmatic ministry, including conducting a youth choir of 35. Wanting to further develop his skills in pastoral ministry and counseling, Joel took his family to Washington DC, where he pursued a training program in Clinical Pastoral Education (CPE) for three years at St. Elizabeth’s (Psychiatric) Hospital. In 1979 he was certified as a Supervisor of CPE and hired as a Chaplain and the Director of Pastoral Education at Overlook Hospital in Summit, NJ. These transitions were extremely challenging for his family and marriage, and he and his wife were divorced in 1981. In 1982 he married the Reverend Noel Koestline, a United Methodist pastor, also in the NY Annual Conference.

For most of Joel’s fourteen years of chaplaincy at Overlook, he was also the chaplain for Overlook’s Hospice team and took on an additional part-time position as Chaplain at a private psychiatric hospital in Summit. He ran therapeutic groups on the adult psychiatric unit, adolescent unit, alcohol and drug, as well as eating disorder treatment units. He also conducted a unique Sunday worship service adapted to the needs of the patients. Additionally, Joel was sought after to lead many educational programs in local churches and taught pastoral care in the Doctor of Ministry program at Drew Theological Seminary.

In 1993, at the age of 62, Joel had a desire to complete the cycle and come home to parish ministry. He was appointed to the UMC in Lake Ronkonkoma, Long Island. However, after three and a half years, he was recruited to help found a new CPE training with Episcopal Health Services of Long Island, where he spent the next seven years, mostly in Far Rockaway, Queens, inspiring, training and motivating ministers of multiple nationalities and faith traditions. Many of those students found his mentoring life-transforming and kept in touch with him throughout his retirement.

In 2000, at age 69, in addition to his CPE ministry, Joel volunteered to take a part-time church assignment and was appointed to Trinity UMC in Coram, Long Island. He loved this little interracial, international, blue-collar congregation and within a few years the worship attendance had more than tripled. Joel retired from his hospital ministry in 2004 and Joel and Noel moved to their “retirement home” on the rural North Fork of Long Island. He continued pastoring at Trinity until 2007, celebrating his final retirement at age 76. In 2004, to overcome boredom and after 30 years of being dogless, Joel took on the project of raising two Bichon puppies, who enlivened and inspired his life for the next 15 years.

In 2014, Joel and Noel moved to a church-related retirement community in St. Petersburg, FL, Noel’s home town. They remained active and valued there as Joel’s Parkinson’s disease and memory loss progressed until he died, full of faith and eager to return Home, at the age of 90 on January 5th, 2022. Joel Warner’s ministry was characterized by energy and drive; personal authenticity, an intolerance for pretense; engaging, relatable, dramatic preaching; transformative teaching and mentoring; productive and empowering organizational leadership; compassion for marginalized people and passion for righting injustices; not to mention pastoral care that moved toward not away from suffering, without judgment but with solidarity and understanding. In personal interactions he wanted to re-present, present again and again God’s unconditional and persistent love through his own non-judgmental presence and deep attentiveness, which he more than accomplished.

Joel leaves behind his wife, the Rev. Noel Koestline; his children Paul, Stephen and Sarah Warner; his daughters-in-law Martha Haakmat and Marcie Smith; his granddaughters Kaila, Georgia, Grace and Avery; two “adopted” children in Mexico, Karen and Alan Velazquez; and innumerable spiritual sons and daughters in multiple varieties of ministry.

There will be a memorial service on Sunday, January 16, 2022 at 3:00pm at the Islip UMC, 350 Main Street, Islip, NY 11751. The service may be accessed online directly from the Islip UMC’s homepage: https://www.islipumc.org. Scroll down to the Sunday Service section and click on the Facebook link. For those attending in person and because we want all to stay safe, we respectfully ask that you sit with your family group, remain masked and maintain 6 feet distance between family groups. The immediate family will be at the church from 2:00-3:00 PM to briefly greet visitors beforehand.

In lieu of flowers, donations can be made to Pilgrims of Ibillin and Common Cause.