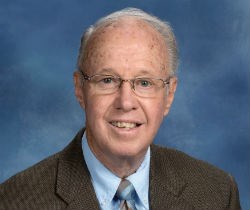 Let us remember the life and ministry of Rev. Willett (Will) R. Porter who died at his home in Mahopac, NY on November 4, 2015 after a brief illness.

Will was born August 28, 1927 in Brooklyn, NY to W. Ralph and Gertrude Harris Porter. He attended Andrew Jackson High School in Queens, NY. He received a bachelor of science in agriculture (animal husbandry) from Cornell University in 1949, where he was a member of the Alpha Zeta fraternity and a coronet player in the Big Red Band. He received a master of theology from Drew University in 1952.

Will was involved in many activities within the communities he served. He was an umpire in the New Paltz Little League and an avid baseball fan; chaplain and life member of New Paltz Volunteer Fire Dept.; charter member of New Paltz Lions Club; and president of Elmont Youth Athletic Association National Baseball League. He was named Mt. Kisco Citizen of the Year in 1989. He was the first recipient of the Annual Humanitarian Award by the Northern Westchester Raul Wallenburg Unit of B'Nai B'Rith; president of Mt. Kisco Rotary Club and a Paul Harris Fellow; and president of the Northern Westchester Clergy Association. He was the first chair of the Northern Westchester Hospital Chaplaincy Committee, Mt. Kisco Boys Club board member, Mt. Kisco Day Care Center board member and chair of Mt. Kisco Village/Town Board of Ethics. The Putnam County Executive and Legislature proclaimed June 28, 2015 as "Will Porter Day."

He is survived by his spouse of 62 years, Shirley Bates Porter, of Mahopac, NY as well as four sons: John B. (Gail), David B. (Paulette), W. Ross (Lisa) and Steven R. (Mary-Ann).  He is also survived by grandchildren Melissa, Michael, Philip, Steven, Jr., Coryn and Katelyn and great-grandchildren Mark, Hadley and Riley.

A funeral service led by Rev. Fredric Jackson and Rev. Elizabeth Ott was held at the United Methodist Church of Mount Kisco on Saturday, November 7, 2015. Interment followed at Oakwood Cemetery in Mt. Kisco.

An additional service honoring Rev. Porter's life and ministry will be held on December 13, 2015 at 2:00 pm at the United Methodist Church of Mount Kisco. Clergy are asked to robe for this service.

Cards and memories may be sent to Mrs. Shirley Porter at 31 Maple Drive, Mahopac, NY 10541.