The Reverend William A. Johnston

The Reverend William A. Johnston 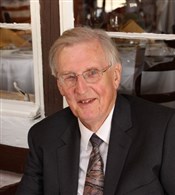 Let us remember with thanksgiving the life and ministry of Rev. William A. Johnston, of Fuquay-Varina, NC, who died on Monday, January 23, 2017. William was born April 8, 1937.

Rev. Johnston graduated from the University of Nebraska-Omaha, and received his master of divinity degree from Drew University. A long-time resident of New York, he taught social studies in the Washingtonville School District for many years. As a pastor in the New York East and New York Conferences, he served the following churches: Baldwin, NY; Monticello, NY; Bloomingburg, NY; Bullville, NY and Grace UMC in Ridgebury, NY. He retired from the New York Conference in 1983.

William was currently serving as pastor at Zoar Chapel UMC in Bullock, NC. He was active in Downtown Rotary (district governor and past president), volunteered at Area Congregations in Ministry in Oxford, NC and was president of his homeowners association.

He was preceded in death by his parents, Arthur L. and Dagmar Johnston, and his brother, Robert Johnston. William is survived by his daughter, Christena Johnston-Pulliam and her husband, Scott; a grandson, Brady; a granddaughter, Coryn; longtime partner, Louise Dorton; two nephews, Richard and Ronald Johnston; and his Zoar Chapel Church family.