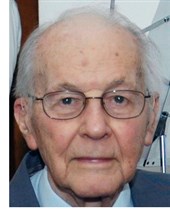 Let us remember with thanksgiving the life and ministry of Rev. William R. Siktberg, 95, who died after a brief illness on Thursday, September 20, 2018 in Kokomo, IN.

He was attended in his final days by his two sons and many devoted friends from the Bennetts Switch Community Church. He was a longtime member of that congregation, and was their pastor in the late 1940s. Four weeks before his death he was still living alone in the house he helped his father build in 1937, supported on a daily basis by loving church friends and from afar by his family. He remained physically strong and independent-minded right to the end.

The third of four brothers, Bill was born March 23, 1923 in Bennetts Switch, IN to Con and Hazel Siktberg. Bill worked in his father's general store, played baseball for Kokomo High School, and decided to attend Taylor University in Upland, IN, where he charted a course to be a minister. He made many lifelong friends there, including Laura Herber of Upland, whom he married after graduation.

He then went to New York City to get his bachelor's degree from New York Theological Seminary (then known as Biblical Seminary). He received his license to preach and was ordained a deacon in the North Indiana Conference and returned to Indiana to serve the Bennetts Switch, Miami, and Cassville Methodist churches. He returned to New York to pursue a master's degree from Union Theological Seminary, serving as pastor of Bethany Methodist Church in Brooklyn from 1949 to 1952. He was ordained an elder in 1951.

In 1953 he moved with his growing family to Wesley Methodist Church in Franklin Square on Long Island. During his 13 years serving that appreciative congregation, he was a creative promoter of youth ministry, steadfastly supported the civil rights movement, and participated in the Billy Graham crusades in New York. He then moved upstate and served as pastor of Fishkill UMC for 22 years. He was beloved by that congregation, especially for his work with the youth group. He brought his family to Indiana each summer throughout his ministerial career. In 1988, he retired and returned to Bennetts Switch, serving as pastor of the Miami parish for several years in retirement.

Bill was an active and creative person with many interests. He was a biblical scholar, enthusiastically studying Hebrew and Greek Bible texts with his brother, Carl, into their 80s. They traveled together to Israel to explore the many wonders of the Holy Land. He loved nature, relishing trips to national parks, and was a devoted photographer, for many years designing and printing his own photographic, often humorous, Christmas cards that were eagerly awaited by friends and family. He was a talented woodworker, making all kinds of things for home and church. He nourished family connections, hosting several large reunions involving cousins from far and wide, including Sweden. He visited Sweden several times with his son, David, and relished walking the Stockholm streets where his grandparents had lived. Bill maintained a deep and caring Christian faith throughout his long life. He was beloved by many for his gentle manner, friendliness, curiosity, and creativity.

Bill's wife, Laura, passed away in 2010, and their daughter, Deborah, died in 2008. He is survived by his brother, Carl, of West Springfield, MA; his son David and his wife, Jennifer Christian, of Wayland, MA, and step-grandchildren, Sam, Peter, and Annie; and his son Stephen and his wife, Lainey Rudolph, of Hyde Park, NY, and grandsons Stephen and Michael. He is also honored and mourned by Tuan Ton, of California, who Bill and Laura sponsored to come to the U.S. in the 1970s and was considered like a son, and his children, DaLam and Katie.