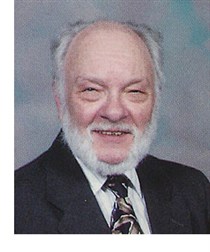 Let us remember with thanksgiving the life and ministry of Rev. Wilmert “Bill” Harry Wolf, Jr., 85, who died on Monday, October 21, 2019 after a long struggle with COPD.

Elected a full elder in 1960 in the Illinois Conference of the Evangelical United Brethren Church, Bill served churches in Rhode Island and Pennsylvania before coming to New York in 1965. He served at West Hempstead, Island Park, Grace UMC in Newburgh, and Valhalla before being appointed as District Superintendent of the Long Island East District from 1995 to 2001. He retired in 2001. In retirement Bill served St. Paul’s UMC in Middletown, NY and Hankins UMC in NY. After moving to Pennsylvania he served Elm Park UMC.

In the communities where he was appointed, Bill served as chaplain of local fire departments, was a member of Rotary and Kiwanis, and was involved in many social justice issues. He loved world traveling, reading, and leading study groups and youth groups.

He is survived by Marianne Hunt, his wife of 43 years; his daughter, Karin Snodgrass; his step-daughter, Christy Wyrtzen; his sisters Sarah Shoemaker and Priscilla Heim; and his brother, Paul Wolf. His daughter Suzanne predeceased him at age 18.

A celebration of Bill’s life will be held at the convenience of the family.

Donations in Bill’s memory may be made to UMCOR, either online or through the New York Conference (make checks payable to “NYAC” with “UMCOR – Bill Wolf” in the memo field, and mail to NYAC, 20 Soundview Ave, White Plains, NY 10606).