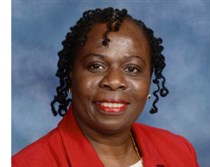 Let us remember with thanksgiving the life and ministry of Rev. Barbara J. Mungin, who entered the church triumphant on Wednesday, October 17, 2018.

Barbara Joyce Mungin was born March 5, 1947 in New York City to the late John Mungin and Martha Parker-Mungin of Beaufort, South Carolina. Barbara was raised in Harlem on 116th Street and obtained her education in the New York City public schools. Barbara knew from an early age that education was key and spent the majority of her life quenching her educational thirst.

In 1994, Barbara decided to answer the call of faith in her life and join the ministry. In July 1994 she was appointed to her first church as assistant pastor of Metropolitan Community UMC in Manhattan, followed by assistant pastor at Epworth UMC in the Bronx. She earned her master of divinity from New Brunswick Theological Seminary in New Brunswick, NJ in May 1997.

In July 1998, she was appointed associate pastor of Salem UMC in Harlem and in July 2001 was appointed for the first time as pastor of Asbury UMC in Mount Vernon, NY. In July 2002, Barbara returned to Epworth UMC as the pastor. Throughout her pastoral journey, Epworth Church always supported her. They were like family and held a special place in her heart. In July 2008, she was appointed to Hempstead UMC on Long Island, followed by Asbury UMC in Croton-on-Hudson, NY in 2013 and Faith UMC on Staten Island in 2014. Between late 2014 and early 2015, Alzheimer’s unfortunately began to manifest more and more and Barbara had no choice but to retire in January 2015.

Barbara was blessed to share this life with many family members, but she prided herself on her three daughters, Melanie Mungin, Ayanna Martin-Williams and Maia Mungin-Oriol. Barbara’s heart grew bigger and stronger with the birth of each of her grandchildren: Seanika Ladson, Aniqa Garrison, Tileyah Williams, Lexus Martin, Jaylin Gary, Dylan Apson, Ashlyn Oriol and Phillip Stradford. Also left to mourn are her sisters, Connie Mungin and Sadie Mungin; her nieces, Sharon Parker & Sandra Parker; and a host of great nieces, nephews, cousins, extended family, friends and colleagues.

Please note that Friendship Baptist Church will allow use of their lot for parking on Friday, October 26th. The lot is located on 130th St between Adam Clayton Powell Jr Blvd and Lenox Ave (closer to 7th Ave). The gate will be opened at 8:30 a.m. Also as a courtesy, the 32nd Precinct will have in place "no parking" signs for the public, but will allow funeral attendees to double park their cars from 131st St to 129th St (on the downtown side).