An exhibit about Rev. Elsie F. Stowe was mounted in the Learning Center at the UM Conference Center in White Plains in the Spring of 2011. This web version allows those who could not view the exhibit to learn about Pastor Stowe and the history of women's ordination in the New York Annual Conference and the United Methodist Church. Click on an image to view it larger in a new window.

Who was Rev. Elsie Stowe?

Rev. Elsie Stowe was an early pioneer of women in ministry in our annual conference area. Born in 1894, she was the first woman to be ordained in the New York East Annual Conference. She believed strongly in ministry to rural churches, and served as pastor to four rural churches in western Connecticut over the co 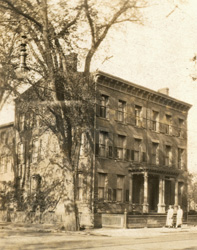 urse of her ministry.

Elsie Frances Stowe was born in Monroe, CT and was educated in the public schools of Seymour, CT. She enrolled in the Blakeslee Deaconess Training School in New Haven in 1916. Upon her graduation in 1918, she gave an address entitled "The Rural Church: An Opportunity for Service" that outlined her love for rural life and her ideas for building up the rural church, which included a strong emphasis on Sunday School and working with children. At the end of her address, she expressed her feelings about se 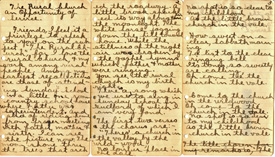 There comes a wonderful joy in God's great out of doors, as you tramp over the hills & thru the valleys calling on your people...And with it all your inner eye is seeing a vision you hope to accomplish...With a sense of humbleness & gratitude, that you are permitted to be a coworker with the author of all these wonderful things,...you straighten your shoulders, lift your head towards the heavens, & say with Paul, 'I can do all things thru Christ who strengthens me.'

As World War I called many ministers away from their pulpits, Elsie Stowe was appointed deaconess pastor of the Newtown Church in Sandy Hook, CT in 1917, while still a student. Thus began her rural church ministry. She quickly established a Sunday School to reach out to the children of the community, and held Easter and Christmas parties, as well as Sunday School picnics. She was consecrated as a Methodist Episcopal Deaconess on March 28, 1920 at the New York East Annual Conference at Old Hansen Place Methodist Church, Brooklyn, NY, by the resident bishop, Dr. Luther B. Wilson.

Below are images from Sunday School picnics held at Newtown in the early 1920s.

On November 14, 1920, Elsie Stowe was granted a local preachers' license (one of the first women of the New York East Conference to receive such a license) by the Rev. William Kidd, District Superintendent, at the First Quarterl

y Conference of the Newtown Church. This license allowed her to perform marriage, baptismal, and burial ceremonies. As seen at left, she officiated at the marriage of her brother in September 1924 to Dr. Ruth F. Bernot, a dentist. Both a "woman minister" and a "woman dentist" were unusual for the time.

In 1922, Ms. Stowe was given additional responsibilities as pastor of the South Britain M.E. Church in South Britain, CT. She served both Newtown and South Britain, traveling the several miles between them largely on foot, until 1927.

Pioneers of Women's Ordination in the Methodist Episcopal Church

When Elsie Stowe was ordained a Local Deacon in 1927, she benefitted from the struggles of numerous women who came before her. Throughout the 19th century, a number of women in the Methodist Episcopal Church, the Methodist Protestant Church, the African Methodist Episcopal Church, and the United Brethren Church were well-known and active evangelists and preachers. In the latter half of the 19th century they struggled with varying success for the right to be licensed as preachers and to be ordained. Women were often granted local preaching rights, only to be denied those rights later by the General Conference.

The Methodist Protestant Church was the first in the Methodist tradition to ordain a woman (Helenor M. Davison, ordained deacon by the North Indiana Conference in 1866). A few years later, in 1869, Margaret Newton Van Cott of the New York Conference was the first woman in the Methodist Episcopal Church to receive a local preacher’s license. This caused great controversy at the 1869 New York Annual Conference, but the church did not take an official stand on the issue until 1880, when Anna Howard Shaw and Anna Oliver requested the right to be ordained. The Methodist Episcopal Church General Conference refused them, stating that “the discipline of the Church does not provide for nor contemplate the licensing of women as local preachers.”
By the late 1890s, the United Brethren Church and the AME Zion Church had ordaine 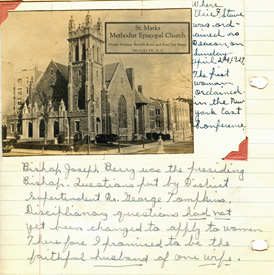 d their first female deacons, and the Methodist Protestant Church had ordained Eugenia St. John as an elder. It was not until 1920 that the Methodist Episcopal Church granted women the right to be licensed as local preachers, and in 1924 it granted them limited clergy rights as local elders or deacons, but without conference membership. From 1944 to 1952 petitions for full clergy rights for women were repeatedly rejected by the Methodist Church General Conference, but were ultimately granted in 1956.
On April 24th, 1927, Elsie Stowe was ordained as a Local Deacon at the New York East Annual Conference, becoming the first woman to be ordained in the former New York East Conference. Two years later, on April 21, 1929, she was ordained as a Local Elder at the First Methodist Episcopal Church in Stamford, CT by Bishop Francis J. McConnell. The scrapbook page she made to mark the first occasion (above right) noted that the "Disciplinary questions had not yet been changed to apply to women. Therefore I promised to be the faithful husband to one wife."

In the Spring of 1927, the newly-ordained Rev. Stowe was appointed to the 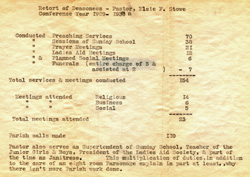 North Wilton M.E. Church (then called Bald Hill) in North Wilton, CT. At left, she is seen with her niece Emily, on the side porch at the Bald Hill parsonage. Her yearly pastor's report for 1929-30 (below) noted the church statistics for the year, as well as the many parish activities for which she was responsible, which included preaching sermons, teaching Sunday School, leading prayer meetings, running Ladies Aid Society meetings, and janitorial duties!

Rev. Stowe served at North Wilton until 1934, when she was appointed supply pastor of the Great Hill Methodist Church in Seym 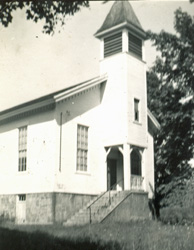 our, CT (seen below left). In summer, she boarded at Hull House (seen below right), and in winter she often lived with her parents in nearby S 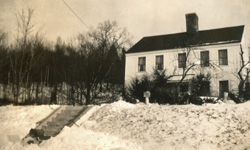 eymour, CT. By the early 1940s, her resopnsibilities to her elderly parents and the distances involved in calling on church members made it increasingly difficult for her to "do justice to the church." In view of the shrinking membership and her personal obligations, in 1941 she proposed to the Great Hill Quarterly Conference that the Great Hill and Seymour churches be placed on one circuit with the Seymour pastor in charge of both and herself as assistant pastor or deac

In 1945 Rev. Stowe was granted a leave of absence to care for her parents. In 1953, after her father’s death, she was appointed Matron of the Methodist Church Home of Aged People of the New Haven District, where she remained until her retirement on September 1, 1960, having served for 42 years as a deaconess.

After retirement she made her home in Norwalk, CT and was active in the Norwalk United Methodist Church. In 1977 she moved to the Wesley Heights Retirement Center in Shelton, CT. She died on June 8, 1994, at just over 100 years of age. 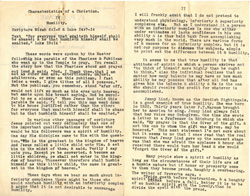 The Rev. Elsie F. Stowe Collection at the Christman Archives

The Christman Archives is fortunate to hold a collection of fascinating materials documenting the life of Rev. Elsie Stowe. These include correspondence, photographs, scrapbook pages, reports, certificates, programs, diaries, and many of her sermons. At left: An excerpt from one of the many sermons in the Rev. Elsie F. Stowe Collection.

In a 1924 newspaper interview, Rev. Stowe described her preaching style: “No I do not believe in the old-fashioned blood and thunder type of preaching…I do not believe that people want to be frightened into being good and they’re not going to be while I’m preaching. Faith and service – these are the two things on which I like to lay stress in my sermons for they are the things that I think are being forgotten today.” [Waterbury, CT, Sunday June 15, 1924]