What is the Epworth Herald?

What was the Epworth League?

The Epworth League was a young people’s service organization within the Methodist Episcopal Church from 1890 until 1940. Unlike the Sunday schools during this era, where boys and girls were taught separately, Epworth League organizations were co-ed. Epworth League members started as young as ages 10-12 in the Junior Division and could belong to the Senior League until they were adults aged 18-34. 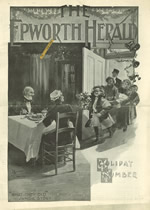 These organizations were established with two great purposes in mind: to get young Methodists involved in good works, and to train Christian soldiers for the ministry. (There is not enough documentation to reflect the Methodist Protestant Church’s participation in the Epworth League.)

What did Epworth League members do?

Members believed in the Wesleyan philosophy that “the world is my parish,” and they worked to establish education that provided both academic study and practical training. The Epworth League’s efforts helped establish Clark College (today part of the Atlanta University Center); they supported literacy efforts in Appalachia and helped connect college students through religious and social engagements on campus.

Epworth League chapters were known for their zealous fundraising and serious involvement in mission work. The 1924 Epworth League Handbook notes that between 1919 and 1924, the Epworth League raised $380,000 for mission work in Africa, a sum that would be worth millions today. Local mission work was also important, and often a young Epworth League member would accompany a Deaconness in her rounds to the hospital, orphanage or retirement home.

In the early 20th century, Epworth League chapter meetings explored such issues as women’s right to vote, racial violence (taking a stand as early as the 1920s against the Ku Klux Klan and its practice of lynching), and public assistance to the disadvantaged.

What happened to the Epworth League? Does it still exist today?

The 1939 unification of the northern and southern branches of the Methodist Episcopal churches with the Methodist Protestant church meant that the Epworth League was renamed the Methodist Youth Fellowship (MYF) and membership was for youth aged 12-24.

Mission work continued to be emphasized, and in the 1940s and 1950s, Methodist students of all races met and worshipped together—this at a time when interracial gatherings of this kind were rare, especially in the south.

What’s so special about these newspaper front pages?

The C. Wesley Christman Archives is grateful to be the custodian of (nearly) the entire run of the Epworth Herald and its predecessor, Our Youth. These issues have been preserved for decades in acid-free preservation boxes by members of the New York Annual Conference Commission on Archives and History. Though we know little about the provenance of these items or how they came to the Christman Archives, we understand that they originally were owned by Carrie Hitt.

The Library of Congress describes the fragility of newspapers produced during this time:

Prior to the mid-1800's, newspapers were printed on paper made using cotton rag fiber. Many of these newspapers, even dating from the early eighteenth century, survive in excellent condition and will, if properly handled and cared for, survive for generations to come. Production of rag paper was a relatively expensive process, however, and as the nineteenth century progressed, technology and increasing literacy combined to encourage cheaper production of paper.

By the 1880's most newspapers and other mass market publications were being published on paper that was produced using a manufacturing technique that substituted untreated ground wood fibers for more expensive rag content, and included additional substances to prevent discoloration and decrease porosity. Paper made using this process carries within itself reactive agents that will speed its deterioration. Excessive moisture will cause the lignins and other impurities present in the newsprint to produce acids which weaken the paper. On the other hand, excessive heat and dryness will contribute to the paper's brittleness. While the use of wood pulp allowed production of a more economical medium for publication, it also guaranteed the instability of that medium over time. The cheapest and least stable form of this paper is newsprint. In addition to its obvious fragility, today's newsprint is especially susceptible to damage caused by heat, light, dampness and airborne pollutants.

These issues present a tangible link to the history of youth mission work within the United Methodist Church, and these 19th-century newspapers are marvelously well-preserved, providing a fascinating glimpse into printing history during this era.

Today’s artifacts, including film slides, t-shirts and program materials, are collected by the Christman Archives for preservation so that future generations might learn and appreciate the rich history of youth mission in the United Methodist Church.

A word about lithography and engraving...

These issues were printed at a time before photographs were commonly mass-produced for newspapers; they instead used lithography and engraving for illustrating articles.

Lithography is a process where the image to be printed is inked onto a lithographic limestone that is chemically treated to transfer ink from certain areas onto paper. This can provide for a rich, multicolored image with a more painterly feel and subtle gradations in shading. This video www.youtube.com/watch shows the process on a modern hand press.

Engraving is the process where an image is etched in reverse onto a hard flat surface, which is then installed in a printing press and used to create a finely-detailed, etched surface.

Can you tell which of these newspaper covers use lithography and which use engraving to create images?